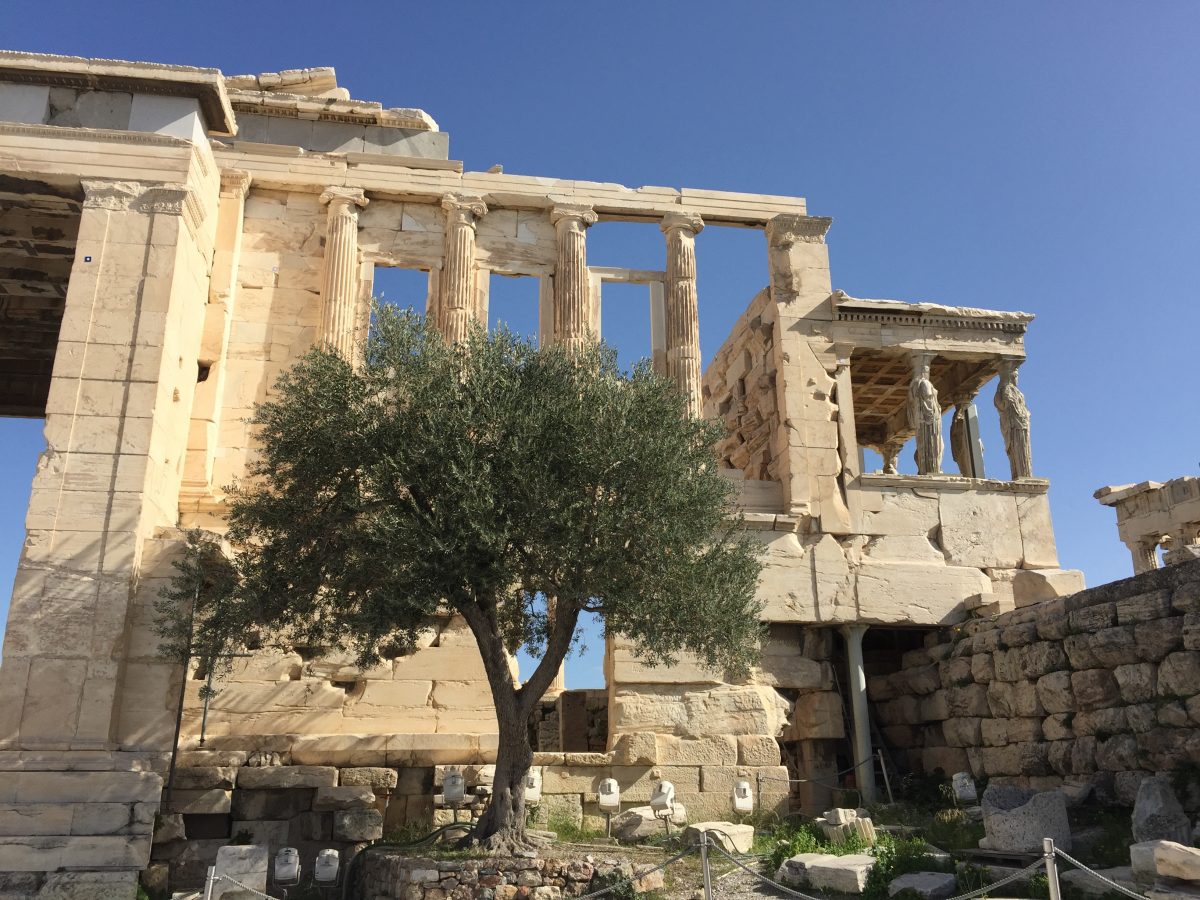 Better late than never, today I finally decided to sort the picture folder of our holidays in Athens. While I had been there many years ago with my parents, for Sara it was the first visit to the Hellenic country.

For many years we had been wanting to visit the Greek capital; those History of Art lessons in high school (it’s bean so many years already!) really left a mark on us.

And so, the week from the 14th to 19th of February we stayed 5 relaxing days in Athens.

We started our journey on the afternoon of Sunday 14th, on an EasyBus to Gatwick airport. After a flight of about 3 and a half hours we finally arrived to Athen’s International Airport late in the evening, and to our hotel, the Athinaikon, already at dusk.

After our arrival to the hotel we went for a first inspection of the are, the district of Monastiraki, where we already encountered the monuments we would visit the next couple of days, illuminated by bright lights during the night hours. Once back in the hotel, our first reaction was to check that all our personal belongings where still with us, because at night time there’s a hell of a lot of weirdos in that district: those women giving away carnations with one hand and stealing stuff with the other, those other guys selling their fake gucci sunglasses, and oh, the local wildlife, 50 guys in the middle of the square having MC battles in greek. Ooooook then!

Day 2 – The Acropolis and exploring the city

The next morning, and after a nice breakfast, we made our way to the Acropolis, home to the imposing Parthenon, and surrounded by other historic monuments. The Acropolis is located at the top of a hill, so there’s quite a long hiking session to reach it.

A bit of history will hurt nobody: the Acropolis was once the center of the public life in ancient Greece. After centuries of sieges, enemy occupations and general neglect, in the XX century a movement for the conservation and restoration of the historic monuments finally appeared, and which has been taking place in different phases. It seems like the complicated works never stop, all with the final goal of returning those ancient buildings to the imposing original state they once had.

After spending all morning in the Acrópolis, and after our lunch break, with decided to explore the areas surrounding the Acropolis’s hill. Heading towards Acropolis Underground station with passed a district of… why delude, people on the gravy train.

The city is full of ancient ruins, if you kick a pebble it will surely land on some historic monument. Walking to the district of Plaka, we found the Temple of Olympic Zeus first, and the Olympic Stadium after, on the way passing next to “random” ruins placed in the middle of the city’s roundabouts, or simply in the middle of the road.

Continuing our walk we arrived to a huge park, which they apparently call the National Gardens. There we found the Zappieion Megaro, a modern building but with a classic style, and for which we still don’t know its specific function. I guess they put it there because they could. The gardens themselves are a oasis of silence in the chaos of the city centre. A part from some relaxing corners, there was also some sort of animal shed with goats, bunnies and several types of birds. We stopped there to have a little rest… and to feed the goats with raw spaghetti, which a Greek guy gave us xD

Curiously, the park is also inhabited by wild soil turtles… huge ones!

Once out of the park we found ourselves in front of the Βουλή των Ελλήνων, the Greek Parliament, where the guard change was taking place at that particular moment. For other things there isn’t, but there’s enough money as for having a bunch of soldiers with ridiculous suits and making a show in the middle of the square hahaha

Justo opposite the street we found Syntagma Square, a strangely familiar public square. For some reason, and to be honest as with almost the entire city, everything has a very similar style to our Spanish cities. Syntagma could easily be a sibling of our Plaza de España in Palma de Mallorca.

The next day, and willing to see our beloved Mediterranean after so many months, we went to Piraeus, Athens’s port, on the underground. The sun was hitting hard, so we first stopped to get robbed 6€ for a little tube of sun cream. The beach turned out to be quite far from the port, so we started looking for it on foot and taking a few trams. We then finally had our beach day, and not even the sun cream saved us from the nice sun burn… in February! … how sad xD

The area is nice, but we left with the feeling that Greeksdon’t know how to take advantage of their coasts. Instead of a nice promenade with shops and cafés to enjoy the sights (what you’d found in any Spanish coastal city) you just find a huge highway cutting the coast from a series of big apartment blocks. This Greeks have no idea. In one of the more or less touristic corners we were able to find at the beach, we decided to stay and enjoy the sunset.

A little subsection on Greek food. The typical thing when going to another country is trying out the typical courses of the place… but which locals hardly ever eat. How many times a weekdays a Spaniard eat courses like Paella, Tortilla de Patatas, Frito Mallorquín, Fabada Asturiana or Pulpo a la Gallega? (Gosh, you can’t imagine how difficult it was to think of typical Spanish food! I think London is affecting us… xD).

Well, every single day you see Greeks eating their favourite course, Gyros (Greek version of the Doner Kebab), in not more than two or three variants ranging from eating it breaded “a la doner“, on a plate with some rice and chips, or in sticks “a la shish kebab“. Perhaps the biggest difference is that these guys use pork in their dishes! F*ck, even Mc Donald’s has thrown version of Gyros: the Greek Mac! lol

On the other hand, and I thought it was impossible to beat Londoners on this, Greeks are totally addicted to caffeine!

I’d love to tell us something more about Greek gastronomy, but a part from those dishes, strangely similar to what you’d get in the Kebab shop at the corner in our block (NOTE: don’t you EVER say this to a Greek xD), I don’t really know what to say. Everything was delicious! But do they really eat this EVERY single day?

After a night of combats against an army of mosquitos determined not to  let us rest, with headed towards the Roman Agora, the centre of commerce and public activity during the time of Roman occupation. The complex is huge, but there’s mostly only ruins of what it once was. The better preserved ones (the ones still preserving the shape of a building), the Hefestion or Temple of Hephaestus.

Just un the other site of the complex is the Stoa of Attalos. The original building was destroyed in ancient times by invading tribes, but in 1953 some rich americans decided to rise an exact copy (with modern materials) on how it supposedly was originally. The interior is now a museum showing ancient objects found in the are (sculptures, weapons, coins, crockery…).

Another lunch break, and we decided to make a visit to Apollo’s Theatre, just below the Acropolis.

To finish the day, we decided to take the ancient walk to the hills of Pnyx and Philopappos, where it is assumed that the Athenians had their first reunions as a democratic folk. Today there’s the astronomy observatory, a part from some awesome and relaxing views from the city at the top the hill.

Recommended by the hotel’s recepcionista, the fifth day we decided to hike up Mount Lycabethos, a hill about 300m high rising just in the middle of the city, and topped with a monastery. During the hike through the forest the day got reeeeaaally hot (coming to Greece in February was the best decision we could have taken), we found another of those huge soil turtles going up the long staircase, hell yeeeeah! lol Once at the top, and after each of us drinking a litre of water, a spectacular 360º sight of the city.

In the evening, shopping in Ermou, the busiest shopping high street in Athens. Once again, it really feels like you just landed in the middle of a Spanish city; it could have perfectly been one of our Majorcan streets, San Miguel or Jaime II in Palma… if it wasn’t for the adverts and signs in Greek!

Talking about resemblances. Greeks are EXACTLY THE SAME as us spaniards, physically, and I would also say they have the same mental problems. Same shouting from side to side of the street, same body language… even the accent is similar! More than once we had a strange feeling which can only be described as “I have no f*ucking clue what you are saying, but I’m understanding everything!”.

Sixth and last day – Spending the last hours at the beach

After a week of relaxing holidays, our last hours in the Greek capital finally arrived. Our plane was departing from the Athens International Airport at about 4 PM, so we decided to spend the last morning at the shores of our beloved Mediterranean Sea, getting ready to go back to the cold banks of our Londoner, river Thames.

And here ends our little visit to Athens. Thanks for following our adventures!